The attacking teams play 5 v 2 in the central zones.  After making five passes, they can play the ball into the 2 v 1 in the attacking zone. From there, the two attackers finish on goal. When a defender wins the ball, they are allowed a free pass into the central zone where they have the 5 v 2 advantage. The GK gets the same free pass when he has possession.

1.  Expanding the space – Attackers should use the entire width and depth of their zone.

2.  Speed of play – Play in a one and two touch rhythm and force the defenders to chase the ball.

3.  Decision making -  Look for passing options BEFORE you receive. Open your stance so that you can see the entire space.

Progression 1 – The attackers must make 10 passes before playing the ball into the 2 v 1. 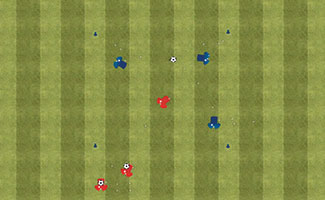 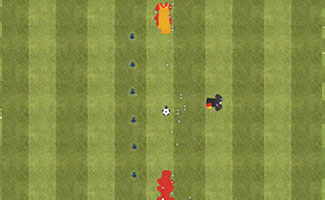