7 Fun U8 Soccer Drills for Kids The soccer drills chosen to include in this list are ones the kids will love and be excited about. The soccer drills are intended for players under the age of 8 years old. These soccer drills for beginners can be a great addition to any youth soccer practice plan. It is critical that coaches at this level make practices fun and exciting and therefore we put together this list of 7 soccer drills that U8 soccer coaches can include in their practice plans. These drills are explained in detail and supported with diagrams and animations. On our soccer training and skills videos page you can find simple drills and techniques to help young players with basic fundamentals.

The drills include soccer concepts that are important for the U8 age level such as dribbling drills, small sided games, ball control techniques, decision making, and developing a love for the game. The list of U8 soccer drills in this article include:

Why Should U8 Soccer Drills be Fun?

It is absolutely crucial that coaches make practices fun while coaching the at the U8 age level. According to an article published on https://believeperform.com the #1 reason kids play sports is to have fun. In fact, in their study showed the top reasons why kids play sports in the following order:

If we want to keep our kids engaged and excited about sports, in this case soccer, then we have to listen to them and place FUN at the core of our practice planning. If you are interested, US Soccer has also released their guidelines for the U8 age level which can be found here.

Anytime you add a race or competition into a drill the level of excitement by the kids for that drill increases. This drill not only adds a level of competition but it is also a great soccer dribbling drill.

Divide your players into two teams of at least 3 players each. Each player will need a soccer ball for this drill. Use the diagram below as a guide for how to set up the drill.

The goal of the drill is for each team to get all of their soccer balls into the “bucket” and all the players back to the end lines. The first team to complete this task wins that round. This drill is the opposite of “Fill the Bucket”. The most efficient way to run these two drills is to run them back to back and alternate between the two because this drill requires no setup after the first drill because all of the soccer balls are in the “bucket”.

The setup is exactly the same as the previous drill, “Fill the Bucket”, but now the balls start in the “bucket”. 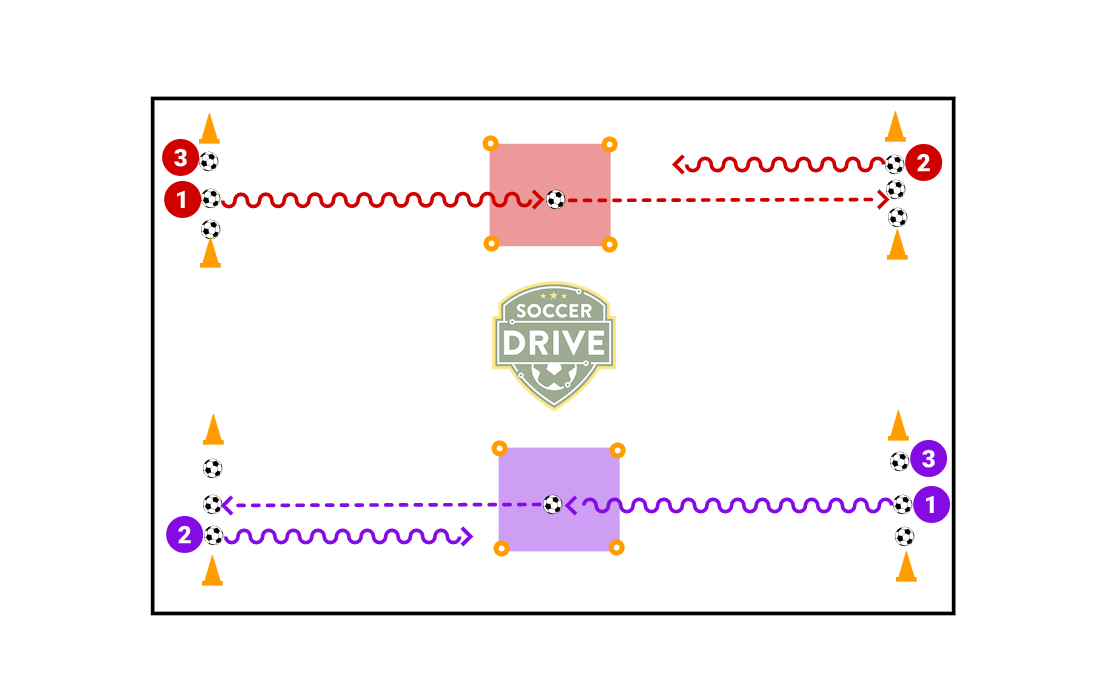 The players will try to “clean” their room completely of any soccer balls. They have to go quick and try to play the balls away from the coaches so it is hard for them to keep kicking the balls back into the “room”. 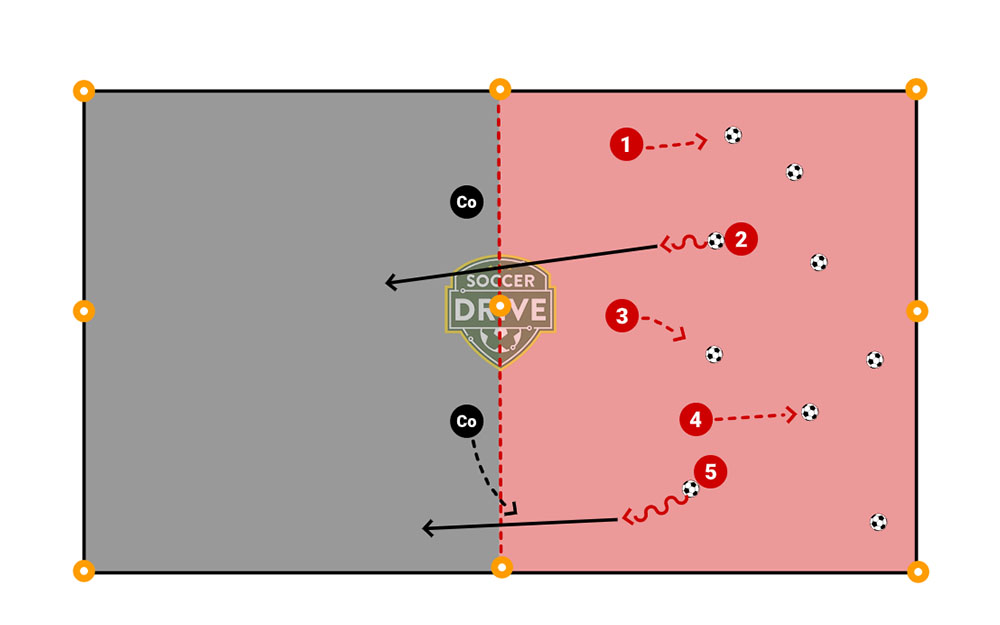 There are a lot of names for this popular game. Another common name is “Sharks and Minnows”. The base variation of this game is played without any soccer balls. Variations can be added to make game more challenging. For the average U8 player it is great to play this game with a soccer ball so they are getting as many touches as possible during practice.

Make a rectangular field about 15 yards wide by 30 yards long. Using discs or cones make out three equal sections as shown in the diagram below. The two sections on the end are the safe zones while the zone in the middle is the danger zone. Place all of the players on one of the end lines with their ball. The two designated “bulldogs” are placed in the danger zone without soccer balls.

On the whistle, players on the end line will try to dribble through the danger zone to the other safe zone without having their ball stolen by one of the “bulldogs”. If they have their ball stolen then they become a “bulldog” for the next round. Play until there is one player remaining. 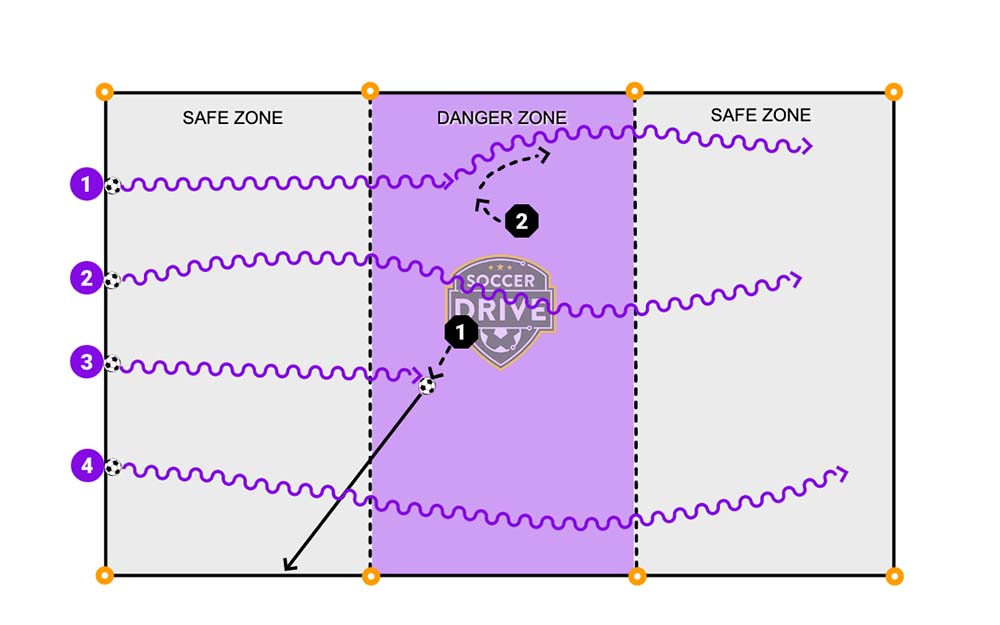 Don’t underestimate the value of a good old fashioned game of Freeze Tag. Young players always love this soccer activity and there are athletic benefits as well. Variations can also be added to include soccer balls.

Mark of a square field using discs or cones that is about 10 x 10 yards. Give one or two players a penny, they are “it”. On the whistle the players that are “it” will try to tag the other players. If a player is tagged then they must stay frozen until they are touched by another player on their team.

The objective of the game is for the “it” players to tag all of the players so they are all frozen at the same time. The players try to keep the game going as long as possible.

Give the players a ball have them dribble within the designated field while trying to keep the ball away from the “it” players. If players get tagged then they must open their legs wide and can only be un-frozen when another player kicks the ball between their legs. 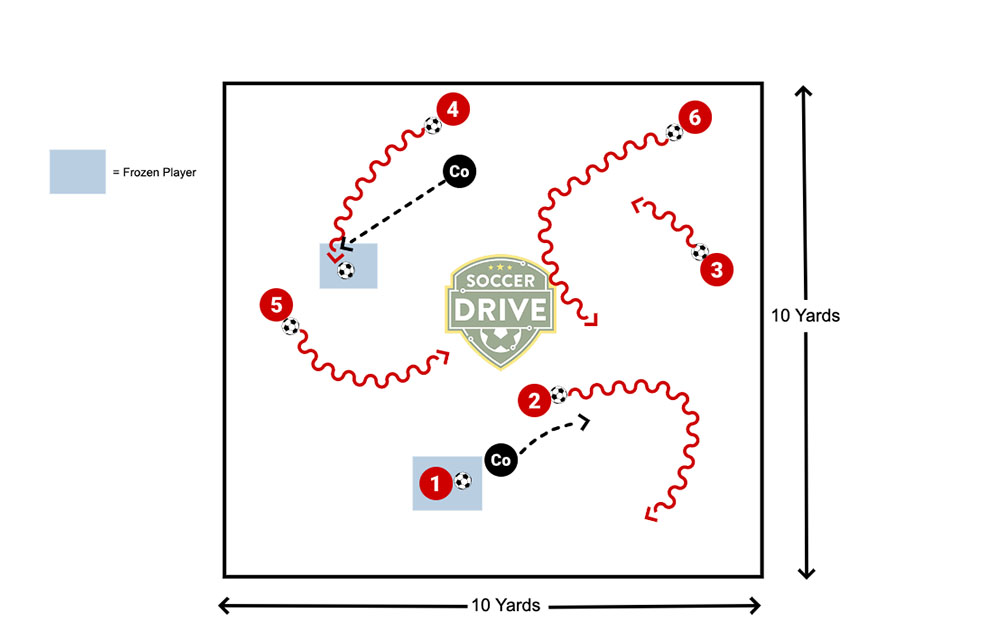 Here is another fun soccer drill that is great if you are working on kicking fundamentals. It allows players to kick the ball numerous times within the parameters of the game.

You can keep the 20 x 20 yard field you had set up in the previous drill. Every player will get a ball.

Each soccer player will dribble the ball within the designated field and try to kick or pass the ball so it hits another player’s ball. Each time they successfully hit another player’s ball they will get a point. Players need to keep track of their own points until the coach blows the second whistle which signals the end of the game. Because the game requires a bit of honesty it is a great time to discuss honesty, responsibility, and accountability with the team. 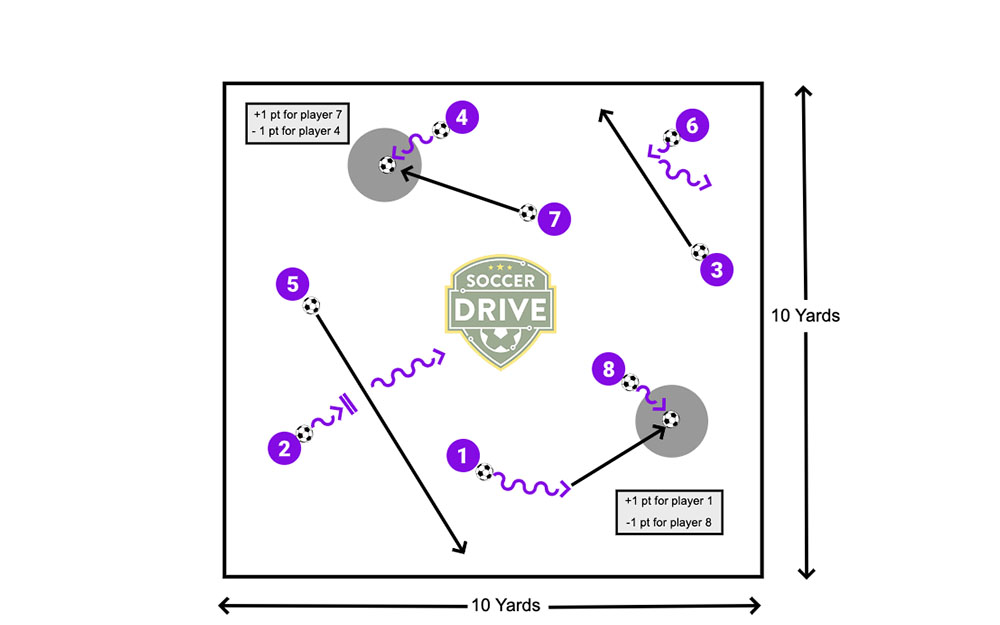 This game is not only fun but incorporates ball control and kicking. The game will also get players excited to score goals.

The players will run to the middle, grab a ball, dribble it back to their net and kick it in the net. Once they have kicked it in the net then their teammate can go. If they miss the net they must retrieve their ball and kick it into the net before their teammate can go. Because there are slightly more balls than players some teams will score more goals than other teams. When all the balls are gone add up the number of balls in each net. 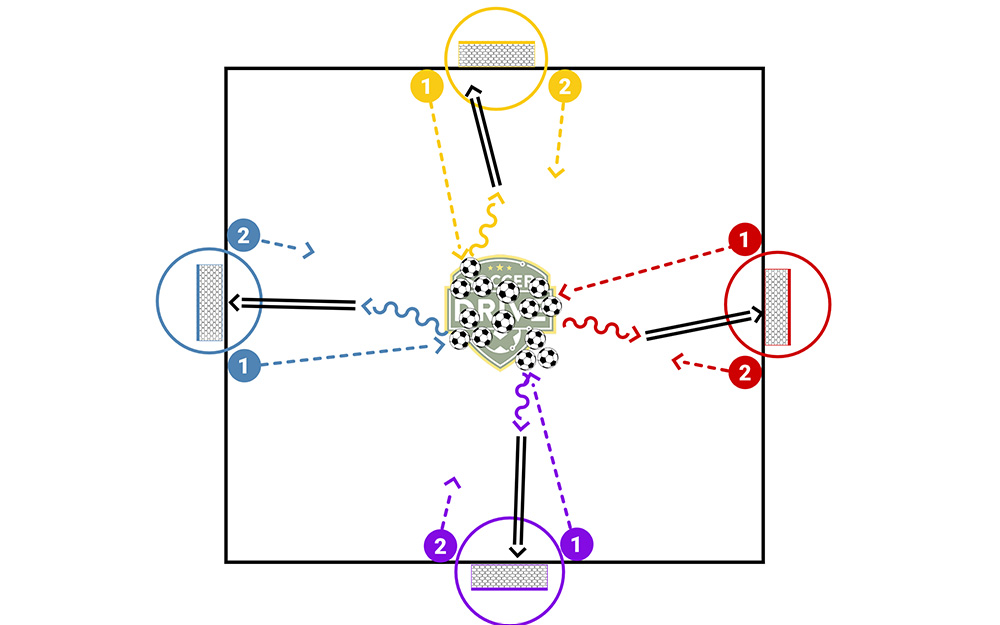 Recap of these 7 fun Soccer Drills

This article is posted simply to give youth soccer coaches some new and fresh ideas. Each one of these drills will not only create excitement but allows for basic soccer training fundamentals. We hope you find value in these drills. If so, please feel free to download the pdf below which contains each of the drills in this article.

Download a PDF file of these Fun Soccer Drills