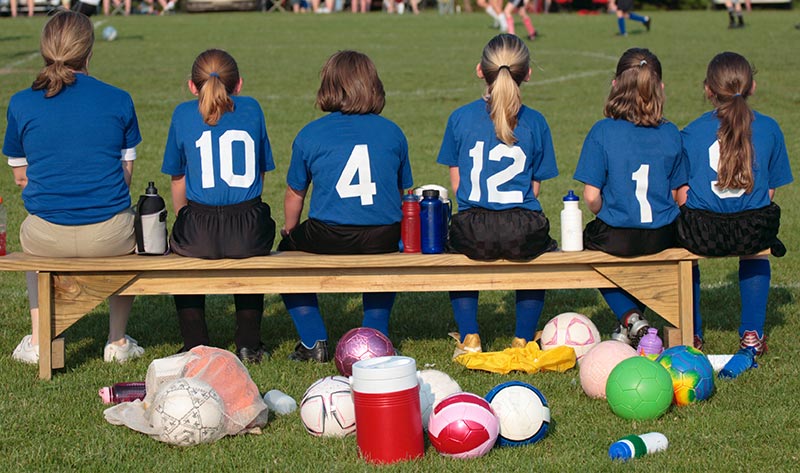 Recreational play is the most important foundation of youth soccer in this country because it is the place where everyone, regardless of ability, size, or income, can play. Every single high-level player in this country started in recreational soccer and, if they had had negative experiences in it, most likely would have quit playing before they had the chance to become as talented as they are now. Therefore, in recreational sports, we need to offer near equal playing time to players in order to give them the opportunity to learn on the field, take risks, and make mistakes. It is important to note that games typically result in less playing time and ball touches than practices. Therefore, is is crucial to incorporate a variety of soccer activities for young players in practice where they all get a lot of playing time and ball touches.

However, equal playing time is a hotbed issue because, as coaches, we want to win. Playing your weakest player as much as your strongest player will absolutely have an impact on the game and the results of it. Therefore, in this blog we will address playing time and some of the questions that come up with providing equal playing time to the players on your team.

"What if I have a player who rarely attends practice? Is it fair to give them the same playing time as someone else who attends all the practices?"

The vast majority of players in a recreational program are below driving age, which means that your players are not in control of their schedules or transportation. By punishing your players for not attending practice, it is holding them accountable for something they have no control over. Instead, try talking to the parents of the player in question, and develop strategies to get their player to practices. If a player cannot make any practices due to other obligations, give that player "homework" so they have an opportunity to improve at home. Examples of homework for a younger player are: "play soccer in your backyard with your siblings/parents for 30 minutes" or "pass the ball against the side of your house 50 times." An older player's homework could be "go on a .5 mile jog while dribbling a soccer ball the entire time," or "Improve your juggling score by 100%." Be creative!

"One of my players doesn't work hard in practices. What message am I sending if I let them play as much as the player who is always hustling?"

Coaches need to be able to set expectations for their players, and then hold them accountable for their actions. While all players need to play equally, feel free to use other incentives to motivate the players on your team: the top hustlers in practice get to start the game, or the person who improved the most in a skill gets to be the captain for the weekend. Furthermore, if you have a player that rarely extends effort, when they do show more drive, it is vital that you recognize that change and reward it appropriately. Kids (and people in general) respond better to rewards than consequences.

"I have a few players that aren't very good..."

No. This is not an option for you as a coach. The weaker players on your team need playing time so they can improve. If you don't play some players on your team as much because they might lose the game, then please take a step back and reevaluate why you coach. Your job as a recreational coach is to help your players love sports and enjoy being part of a team. It is not to win games at any cost, no matter what level of rec soccer your team may be in.

As a recreational administrator, I get reports of coaches every season who are giving less playing time to players, and it is difficult for the league to enforce as it relies on eye-witness accounts. However, if you are a coach who deliberately withholds playing time due to ability, please change that approach or step aside at the end of this season. There is no place for that type of adult egocentric behavior in children's recreational soccer. The only reason recreational soccer exists is to create a place where everyone regardless of age, ability, or income can play soccer. That's it! This is the place where everyone can play. If they can’t get playing time on a rec team, they have nowhere else to go.

Finally, please take a look at this article entitled the Top Reasons Kids Quit Sports. This chart isn't specific to soccer, but sports in general. Please note that "not winning enough" is not in the top five (it's actually 48th!), but playing time ranks in at number three!