Players move thru an agility and skill circuit with Feeders playing balls into the exercise.

Part 1: The player runs or dribbles around the four mannequins. The Feeder plays passes in, demands the ball back from the player.

Part 2: The player passes off to the Feeder, runs thru the agility ladder, then receives from the Feeder. From there, he dribbles straight ahead and around the mannequin to run thru the ladder in the opposite direction while passing and receiving.

Part 3: The player runs around the far mannequin and looks up quickly for the pass from the Feeder. After receiving, he takes one dribble touch and finishes on the small goal.

Part 4: The player picks up a ball at the feet of the mannequin, runs with the ball around the far mannequin, sprints towards the small goal and finishes when the Feeder class for the shot. He finishes all four balls, and then returns them to the mannequins.

The key objective is to get the player replicating game realistic movements. Coach correct technique to enhance players speed over the pitch. Teach body position, balance & change of speed.

1.   Perform all skills and exercises at game speed.

2.   Make your movements game like. It's not just a race around an obstacle course.

3.   Communicate with the Feeders and call for the ball when you want it. Receive it where you want it. 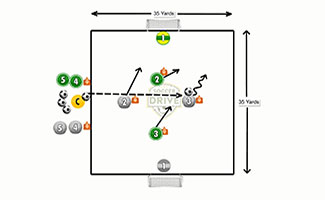