The teams play 8 v 8 plus one on a field split into four zones. The red team attacks the small goals, and the blue team attacks the large goals. Each team stations two players in each zone. One neutral attacker – the “Number 10” in pink – follows the ball into all of the zones, creating 3 v 2’s around the field. After a score, the attacking team keeps possession and the teams switch goals. Games are played to eleven points.

1    Decision Making – Turn away from crowded goal areas as opposed to forcing the play.

2    Vision – Play with an open stance and be able to see the other zones during play.

3    Turning – Direct your first touch away from the defense as you receive. 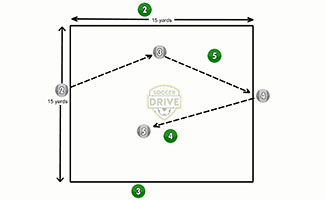