Training the Outside Backs

To begin play, the attackers start 6 v 4 in their own half of the field, trying to advance the ball over the midfield line. Two of the attackers must remain in the channels during play. The ball cannot be advanced over midfield thru a channel. It has to be passed or dribbled across inside the field. After the ball moves past midfield, play continues 4 v 2 (two attackers come across, two stay behind, and the two players in the channels come across).

Upon completion (shot on goal, loss of possession), the four attacking players become defenders and the team waiting on the end line comes onto the field to start the next attack, 6 v 4.  The attackers left behind in the previous attack stay in their own half to defend the 4 v 2. And the other team of six players waits on the opposite end line.

*The two players that defend the 4 v 2 become the channel players for their team in the next attack.

1   Receiving Out Wide – Set your feet early and take your first touch forward into the space.

2   Timing – Hold your run into the attacking half until the play develops.

3   Crossing – Be ready to strike an early cross in order to play the ball in behind the defense.

4   Transition – After the attack, transition to defending immediately.

1    Channel players are allowed to leave the channel in order to finish on goal.

2    Limit the players in the channels to one touch. 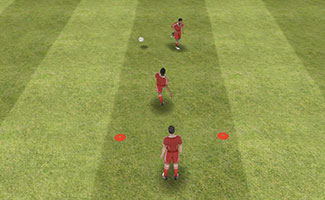 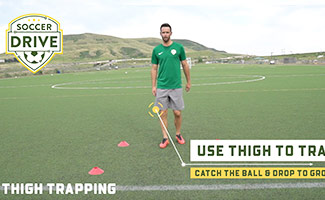