Working Thru the Midfield

Play begins with a 3 v 1 in the defensive half of the field. At any time, the attackers can change the ball into an adjacent zone and send the two neutral players into that zone to re-form the 3 v 1. When play progresses into the attacking half, the attackers can then play into the 2 v 2 for a finish on goal. Other than the neutrals, all of the players must stay inside of their zones during the game.

1   Decision Making – Maintain possession until an excellent opportunity to change the ball arises.

2   Speed of Play – Play one and two touch soccer and force the defenders to chase.

3   Anticipation –  The neutrals need to make their runs into the adjacent zone in advance of the pass.

Progression 1 - Allow long passes thru zones and into the other half. 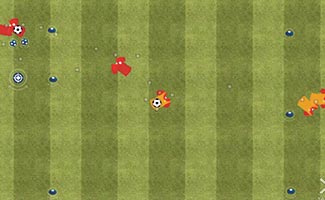