The two teams play 2 v 2 plus two in each half of the field - the two neutral attackers (in pink) move up and down the wings inside of their flank zones. Also, three neutral attackers (use your central midfielders) play 3 v 1 against a neutral defender (in black) inside of the center circle. Each attack must begin with a pass from the defending half into the center circle. From the circle, the ball can be distributed into a flank zone or directly into the attacking half. Play continues 2 v 2 plus two, with the neutrals staying in the flank zones at all times. Those neutrals are limited to two touches. Players in the center circle must stay inside of the circle during play.

1    Passing – Play to the feet of the player in the center circle so that he can play one touch passes.

2    Combination Play – Look for the Up, Back, and Thru combo and time the runs accordingly.

3    Creating Space – Strikers should check away from the ball, and then run back into the space.

Progression 1 – Add a defender, allow neutral players to cross over with the pass.

Progression 2 – The neutral defender can leave the circle when passes are made to flank neutrals. 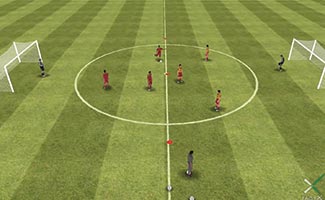