Thru Passes in Traffic

Four groups of four players inter-pass within their square, looking for a chance to send a player into the next square with a thru pass. When the thru pass is made, the group follows the pass into the square to start the next passing cycle. Two of the groups move clockwise around the grid and two move counter-clockwise. All four players must make at least one touch on the ball before sending a player into the next square. There is no limit on touches but ideally, the players should be working in a one and two touch rhythm. The boundary lines between the squares should be thought of as the offsides line.

1   Timing the Run – The player receiving the thru pass must hold his run until the play develops.

2   Speed of Play – Support players must show and call for the pass as early as possible.

3   Passing Angles – Supporting runs should be made in view of the passer. Don’t make him turn.

Progression 1 – Limit two players in each group to one touch. 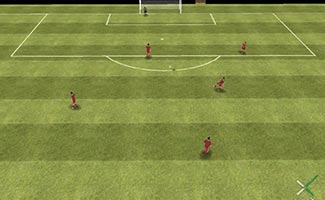 Inside and Outside Touches (One Foot)