Players 2 and 3 support the players shuttling back and forth, running the following combinations.

Each combination has verbal and visual cues that must be practiced on each repetition. Players 2 and 3 are very active during the drill and will need to be rotated out after 1-2 minutes.

1    Wall Pass – Support players must set up close to the ball in order to keep the passes short.

– The second pass should not slow Player 1 down.

– Player 2 has to decide whether to play with one or two touches.

3    Overlap – Players 2 and 3 makes runs into the middle to initiate the combination.

– Player 1 calls for Player 2 to “Hold” as he makes his overlapping run.

4     Dummy, Thru Pass – Player 1 accelerates after making the first pass AND calls for the ball.

– All three passes must be made with one touch for the timing to work.

1          The players choose a combination based on verbal and visual cues given by Players 2 and 3.

Players Required:
6-8
Find similar drills in the folllowing categories: Combination Play, Overlap, Passing Drills, Through Passing, Up Back and Through, Wall Passing 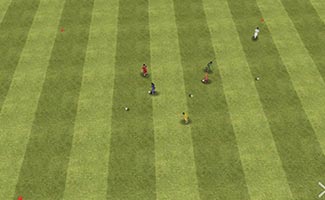 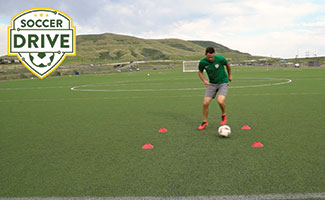 First Touch: Receiving Ball with Outside of Foot