One of the best ways to naturally bring out the competitive nature in your soccer players during practice is by adding in 1 v 1 activities, small sided games, and races. The human spirit is instantly ignited when there is a goal to score, a race to win or an opponent to beat. Below we give you 5 simple, yet competitive 1 v 1 soccer activities to ramp up your practices and help players work on their 1 v 1 skills.

Before we dive into the activities, take a look below at 5 basic dribbling skills to use when beating a defender. Watch the video and practice the skills displayed so you can become more elusive in a 1 v 1 setting!

What were some of the main takeaways in the video above?

The video above was aimed to give general ideas on how to beat a defender. Get creative and have fun thinking of other ways to go around someone! Use body fakes, leg fakes and various touches to be deceptive! If you would like to sharpen up your dribbling, check out our post on 5 Dribbling Exercises to Sharpen Your Footwork.

Now that we a basic understanding of some key skills that can be used to go around a defender in a 1 v 1 setting, let's jump into the 1 v 1 soccer activities! These can be done at home with a friend or in a youth soccer practice with groups. Have fun with these! We will start simple and increase complexity with each activity.

This is a simple activity where a player works to keep possession of a ball within a 10 x 10 yard box until time runs out. Coaches can switch up the amount of time the 1 v 1 battle goes on for so that players do not know when the game will end. Encourage players watching to cheer!

Save 1 vs 1 Keeping Possession 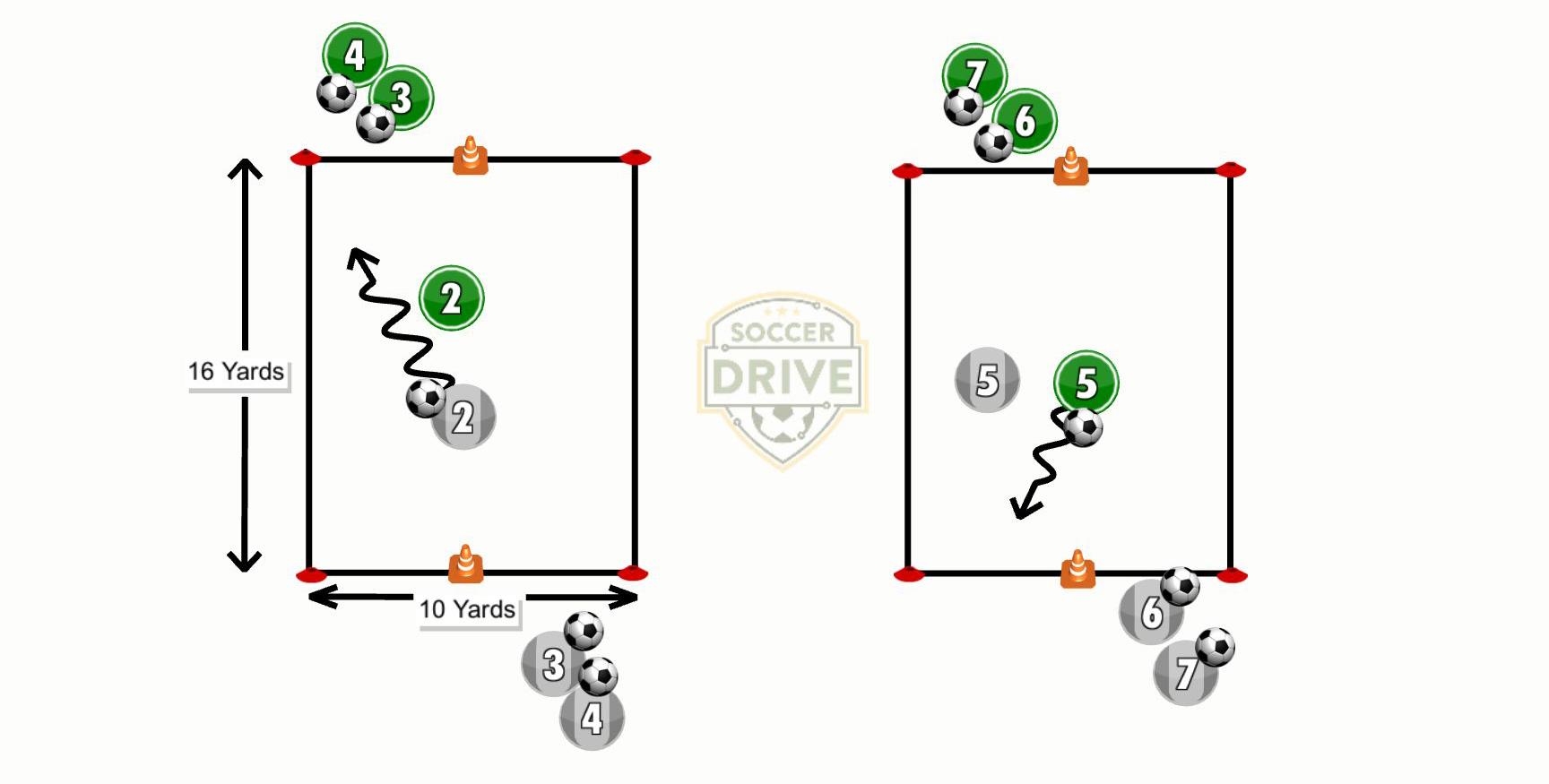 This activity builds on the first one. Players battle 1 v 1 and work to cross an endline in a 10 x 10 yard box. The coach keeps score and players watching should cheer and encourage their team!

Save 1 vs 1 Attacking Space

Activity 3: Get In The Zone! 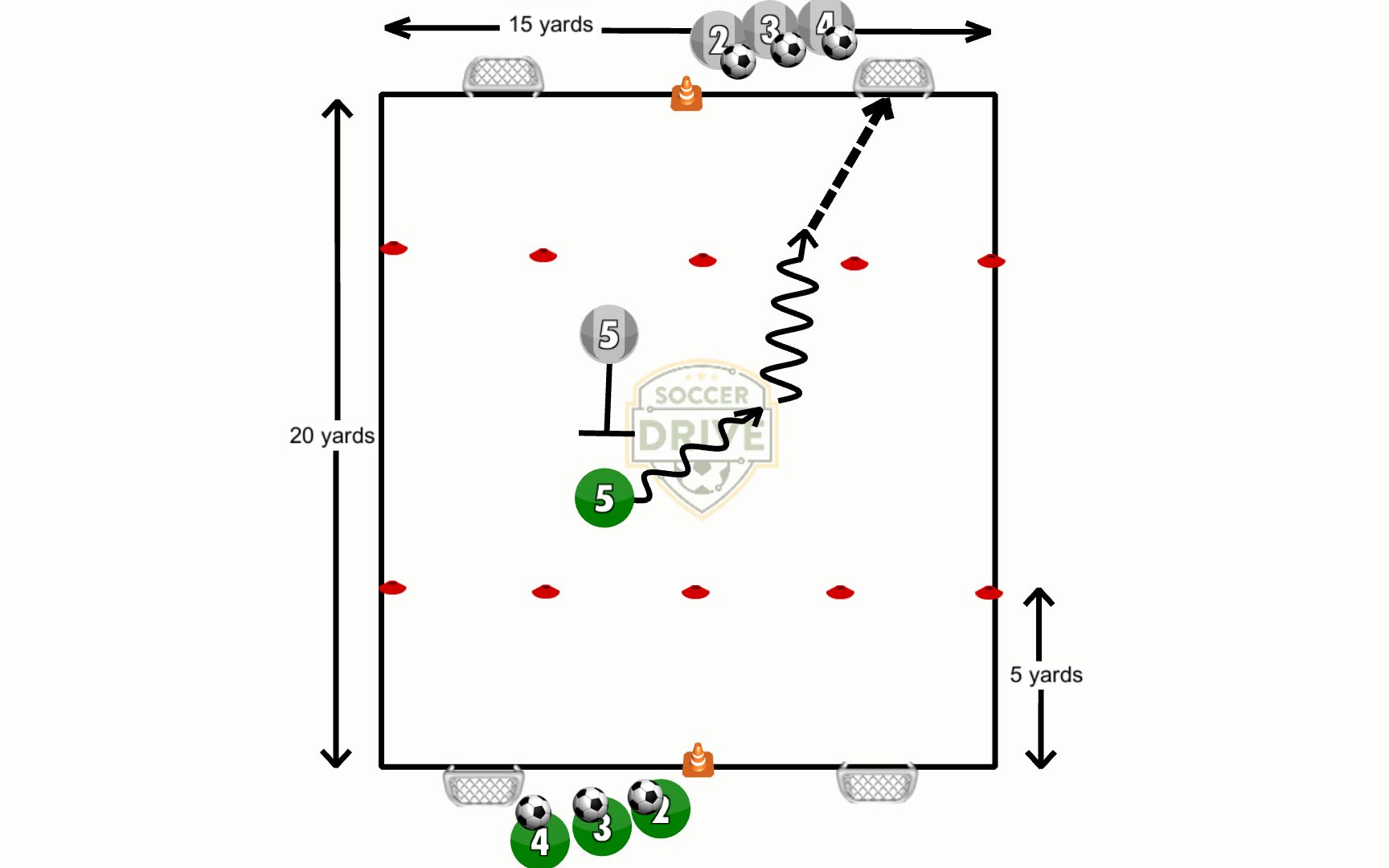 Get In The Zone! Overview

This activity builds on the second activity and gives the players more space to dribble (and defend) and requires them to score on a net for a point. Players watching should be engaged and cheer for their teammates!

Get In The Zone Coaching Points

Save Get In The Zone 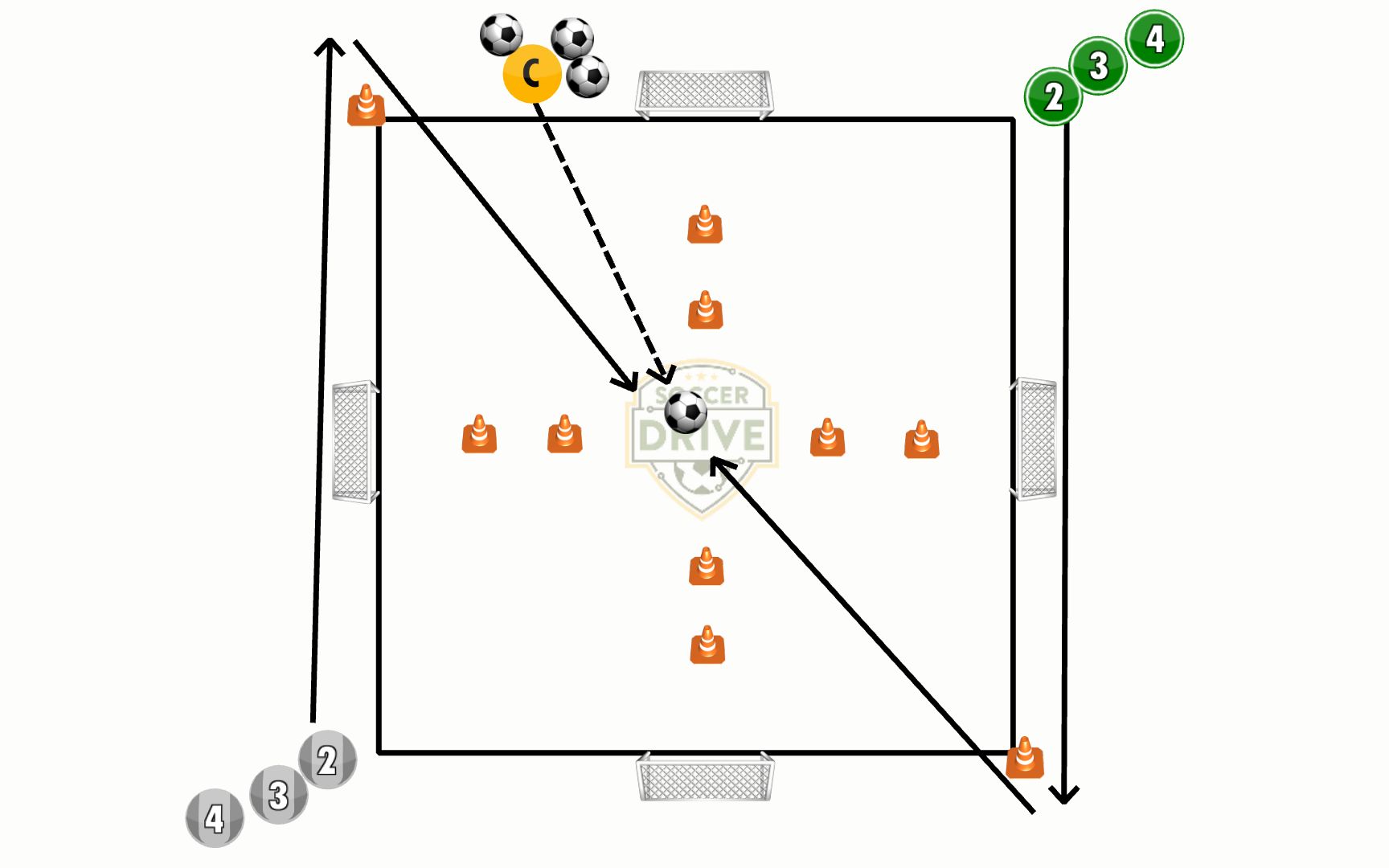 This activity adds a conditioning component into it as both players need to sprint to the ball. Once the ball is claimed, a player must dribble through the gates before they are allowed to shoot on net. Again, watching players should encourage the two players battling. It is always fun to hear your teammates cheering for you. Coaches keep score and switch up the ball placement!

Activity 5: 1 vs 1 Wall Passes Under Pressure This 1 v 1 activity introduces the concept of wall passes and give and gos into game play. The goal is to get to the other side with the ball. This activity requires only one soccer ball, three players, and one coach.

Save Wall Passes Under Pressure

Extra Credit Activity 6: 1 vs 1 with Bumpers

This 1 v 1 activity builds on the previous one and introduces the concept of wall passes, give and gos and shooting. Use deception, creativity and possibly a wall pass to get a shot on net!

Save 1 vs 1 with Bumpers

As stated above, the human spirit is instantly ignited when there is a goal to score, a race to win or an opponent to beat. Adding 1 v 1 soccer activities into your practice session is not only a great way to increase practice intensity but a valuable skill to help players develop their soccer game. Plus these 1 v 1 battles are a blast for your team!

If players learn how to dribble to continue to possess the ball, or dribble to beat a defender, the whole game will open up for them. Then they can start to pick their head up, pass the ball to a teammate and jump to space. Or, if the opportunity presents itself, they can take a shot on goal. Have fun with the soccer activities listed above! Give your players fundamental coaching points and also encourage them to be creative!