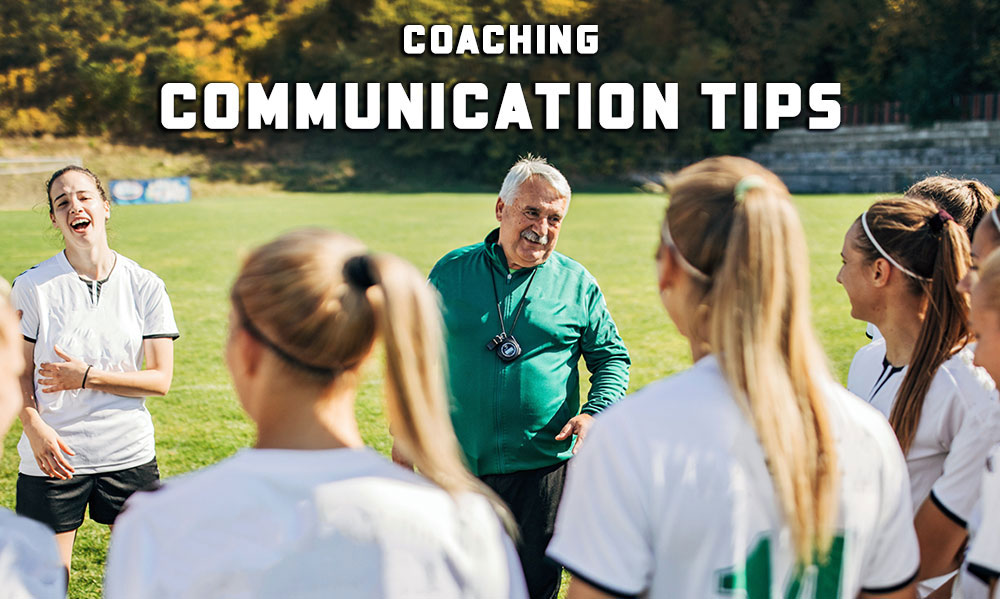 Coaches: communication is your friend

Successful coaches communicate with their team’s players and parents. Coaches who fail do not.

In it’s simplest terms, coaching is the business of building relationships. Below we will give tips and ideas to help you develop relationships and communicate better with your players and their parents.

Communicating With Your Players

Building relationships with your players is the most important thing you can do as a coach. It’s what your players will remember you by.

Develop Trust: Learning about your players and showing a genuine interest in who they are is vital towards building trust. While most coaching education material and courses focus on technique, tactics, and what to do for practices (Soccer Drive included!), the most important aspect of coaching and getting the most from your players is being able to build trust, earn mutual respect, understand who they are, what their goals are, and the struggles that are going on in their lives. This can only happen through communication.

Discuss Non-Soccer Topics: Taking time each practice to have a couple of conversations with your players goes a long way towards developing relationships. Speak with your players, ask them what they are doing in school, ask them follow up questions. Most importantly, listen to their answers. Remembering what they say and being able to follow-up about it later with them shows that you care and you think about them. For example, if a player says they have a big project at school next week, ask what it is about, offer some insight into it (if you have any), and make sure you ask them how it went the following week. Tell them you are proud of them. If you have trouble remembering details on all of your players, take a couple of minutes to jot down certain discussions that so you can bring up later. It will mean the world to your players.

Coach-parent communication and relationships are also very often overlooked and can make the difference between an ok season and a great one. Especially in recreational and competitive sports, parents buy the equipment, drive their children to practice, pay the season dues, purchase the coach gift at the end of the season, and are on the sidelines cheering every game. Alienating the parents on your team creates problems that can be subverted by communicating with them upfront.

Pre-Season Meeting: For example, it’s important to always start a season with a pre-season parents meeting to get everyone on the same page. It helps parents understand who you are, your background, your goals for the season, and expectations heading forward. View our pre-season meeting tips.

Short Weekly Email: In addition, it’s recommended that coaches spend 5 minutes each Friday evening during the season writing a short 1-2 paragraph email to their team's parents recapping what you worked on in practice that week. It doesn't have to be anything too in-depth, but should cover some of the techniques the players are learning, a reminder about the weekend's game time and location and, most importantly, guidelines for what you'd like the parents to look and cheer for during the games that week. You could even include a YouTube link to a video that shows the skills that you're trying to teach the players!

These emails have proved to be very beneficial as it gives the parents on your team guidance to help you encourage your players. Have you ever been frustrated when you're working on dribbling in practice but, come game time, the parents are telling the players to “boot it?” This can usually be fixed by just bringing the parents in on the game plan beforehand. Letting them know that you've been encouraging players to dribble and, when a player tries to do so (even if they fail), you'd like the parents to applaud the attempt. Doing so will be huge for reinforcing that technique and instilling the confidence in that player to try again.

If Issues Arise: Inevitably, however, issues do come up during the season. It’s important to let parents know prior to the season starting that they can talk to you about concerns, but encourage them to have their child to talk to you first. This helps instill confidence is young players and teaches them how to advocate for themselves. If the player isn’t confident enough yet, or too young, then the parent can absolutely come with them. Youth sports is the perfect opportunity for teaching children how to speak up for themselves as it’s a safe environment.

24 Hour Rule: However, if a parent needs to privately contact you about something they are upset about, make sure to set the 24-hour rule: If a parent feels something absolutely needs to be discussed that upsets them, they must wait 24 hours before contacting you. This allows emotions to die down, and for you two to have a better and more productive conversation about the issue.

The vast majority of issues a team runs into during a season can be solved beforehand by open communication between the parents, players, and coaches.

Set expectations and a plan prior to the season. Keep the parents in the loop as the season progresses, and spend time getting to know your players!

When former players are asked who their favorite coach ever was, they almost always talk about someone who they felt comfortable with, made practices fun, and felt showed a genuine interest in who they were as people. They don’t remember the wins and losses. hey always remember the positive experiences and interactions of being on a team that cared about them and helped them develop on and off the field.