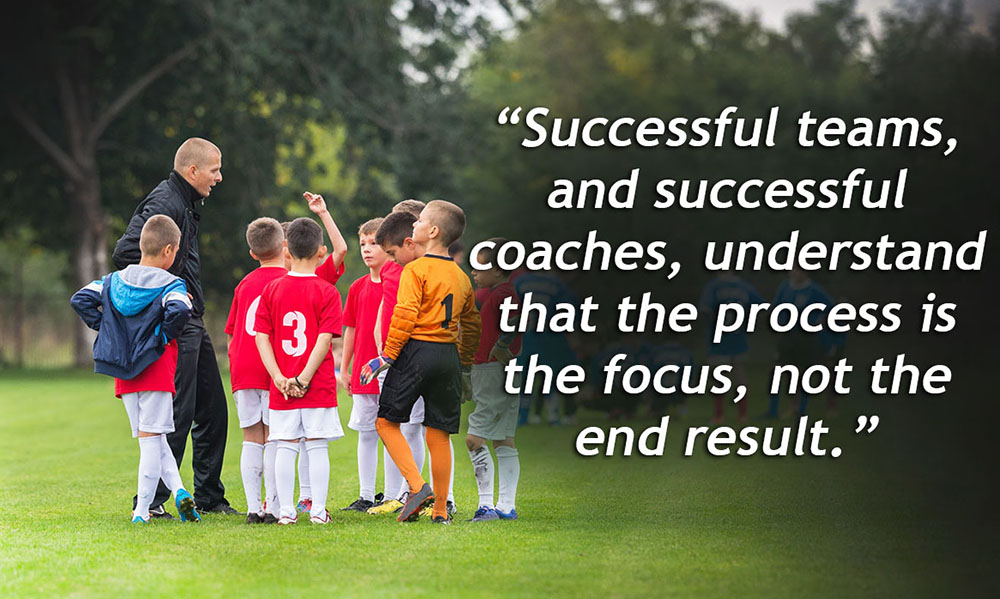 In this article, we are going to explore what the common tendencies are of a successful youth coach, be that on the recreational or competitive sides of any sport. To start, I’d like to throw this quote at you:

“What we need to know is that many of us are making a difference in many children’s lives, whether they go to play at the highest level or their highest level. Children never forget a good teacher. It is my goal to never be anyone’s last coach”

It’s important to understand that, no matter if you agree or disagree with the points made in this article, that being a good person is the overriding #1 most important factor in any endeavor you take on in life, whether that be your personal job, family life, or coaching. Being a good person, who is fair, consciences, empathetic and has good intentions goes a long way towards becoming a successful soccer coach. Being this type of person helps gain the respect of your soccer players, their trust, and allows them to have fun playing for you. However, what causes fun?

A fairly recent study entitled Fun Maps was conducted by Amanda Visek at George Washington University which focused on finding out exactly what fun is. Through the study, players were asked to identify what is fun about playing youth sports. The consistent top 3 answers were:

Makes sense, right? Try replacing “coach” with “boss” and “players” with “employees” and see how close this applies to you with your current job satisfaction.

The personality of the coach, and how they treat their players, is so important that in German coaching education courses, the majority of a coach’s grade is based on if the instructor “would want to play for them.” Personality and intentions count, and as we explore the other qualities that make up a strong youth coach it’s important to understand that exemplifying your players as people, over your ego and need to win, will be the biggest leap you can make towards making your soccer team stronger.

To explore some successful coaching traits, please consider the following common problems that arise with all teams. How would you address the problem? What steps would you take to help your players bypass these hurdles?

Issue: Players having trouble getting into good habits

One example would be players can’t seem to get into the habit of looking over their shoulder before receiving the ball. You’ve run multiple practices on the topic, but your players still only play the way they face when receiving.

If your players aren’t learning what you want them to, it’s not necessarily a problem with the players, but an issue with the message. Be creative with how you deliver instruction to players. There are many different learning styles, so repeating the same message the same way continuously will only serve to frustrate the players and yourself.  Players learn in different ways and it is important for coaches to be perceptive to the learning styles on their team.

“The definition of insanity is doing the same thing over and over again and expecting a different result.” – Anonymous

On a recent trip to observe the Celtic Academy train their youth players, I noticed many players had small bands on their left wrists, as well as around one of their calves. When asking the player’s coaches about it, they told me that they were used as a visual reminder to the players about remembering to use their weaker foot when appropriate, as well as to check their shoulder before receiving the ball. Catching a glimpse of the band in practice while running would give the player an immediate reminder that they need to look over their shoulder and examine the space behind them. Pretty ingenious.

Another example of varying instruction methods was shown by sports psychologist Dan Abrahams. While running a session on “movement off the ball to create space,” he would ask players to raise their hand during the session whenever they felt they created space on the field. The game didn’t stop when a player raised their hand, but was an in-the-flow action which showed the coach that the player was making a deliberate action, as well as serve as a reminder to other players to create space with theirs as well.

Issue: Teams that are suppose to be weaker than us keep beating us

These types of expectations are typically brought up by parents and those that don’t understand what really matters in youth sports. If sports were played on paper then why play? Coaching youth soccer is much more complicated that simply living up to performance expectations. If coaches are caught up in performance anxiety then so will their players.

Soccer is a psyche/social game over a technical/tactical one. You can have players with fantastic technique and tactical know-how, but if they aren’t comfortable and happy with their soccer, you won’t be able to get the most out of them. To use a recent example, look at the transformation of Manchester United from Jose Mourinho to Ole Gunnar Solskjaer. Same players, but you can see the positive shift in player psychology and how that is translating to the field.

To use a youth example, a good friend of mine who coaches high school soccer in Montana, says he manages performance anxiety by setting “development milestones” during his team’s pre-season goal setting meeting. Instead of setting lofty team goals like ‘win a state title’ or ‘remain undefeated this season,’ he sets realistic goals that can be achieved each game. For example, the first milestone for each season is ‘score a goal.’ Once that is achieved, the next is to ‘win a game,’ then ‘keep a clean sheet,’ etc. While several milestones could be hit each game, there is always another one to hit that is a little harder than the last.

The focus of the team from the pre-season meeting onwards is to improve each game, as improvement gives them the best opportunity to reach their next goals. In contrast, setting lofty goals like ‘win a state title’ or ‘remain undefeated this season,’ can be broken by losing the first game of the season. What then? Successful teams, and successful coaches, understand that the process is the focus, not the end result. By focusing on the process, you allow success to happen naturally and as a byproduct of development.

Issue: Practice intensity is too low.

Players make the motions, but training has a ‘meh’ feel to it. Good soccer coaches will create an environment where players are excited to come to practice, compete, and learn.

Solution: Get players to completely “Buy In”

Coaches who get 100% “buy in” from their players can answer the question “why are we doing this?” and present the information in an engaging environment.

How can we teach technique and keep it engaging? I see many coaches on the practice fields who run very static practices:

Below are two examples of dynamic activities.

The game on the left is a dynamic passing game called 2 vs. 2 Plus 2 that encourages players to move to open space to support their team. The game on the right is called 3 Goal Counter and is a defending activity that focuses on pressuring an attacker quickly. Click the links to view coaching points & set up.

Strong coaches can paint a picture of not only “this is what you have to do,” but rather “this is what we should do, because then it was cause this to happen.” Doing so helps to create a picture for your players, which helps them understand what you are asking them to do. Try it in your practices: keep the activities dynamic and, when there is a breakdown in them, recreate the scene right before it happened and show your players what they should think about doing next time to fix it. Keep in succinct, and check understanding by re-asking your players open-ended questions at the end of practice to see if it stuck. Learn additional benefits of dynamic soccer activities.

Summarizing the Qualities of a Successful Youth Soccer Coach

Developing the tendencies of a successful soccer coach takes time (like learning how to play a sport takes time), but it is important to keep learning; admit you have weaknesses, and strive to be a little bit better each training session and game you coach. Hold your players accountable, but most importantly hold yourself accountable. You’re the leader – be deliberate.

A Few Questions for You

Take PRIDE in your work:

Good luck in your journey!