Lesson 15: Why Won't My Team Spread Out? 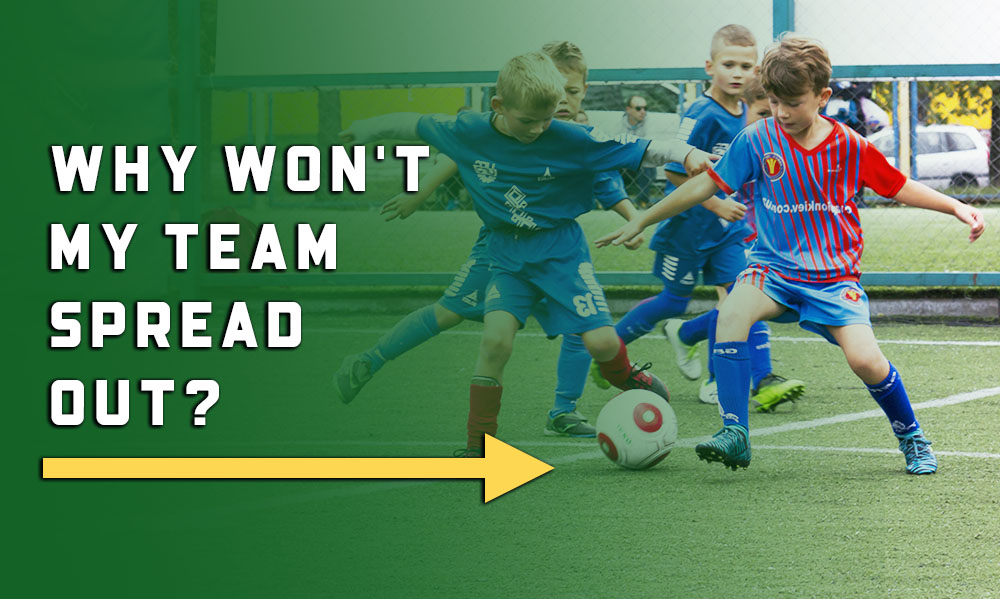 Why Won't My Soccer Team Spread Out?

Coach, it’s ok, you’re not the only one! The answer is most likely due to the age of the players you are coaching. While everyone learns at different speeds, there are general characteristics for how people mentally develop. These are important to understand as a coach, because trying to teach a concept to players who aren’t mature enough to grasp it will leave you, and your players, frustrated. In child psychology, this is referred to as making learning ‘developmentally appropriate.’

Players at these ages don’t necessarily like to share. They have a high center of gravity, are uncoordinated, and will fall down a lot. They can perform tasks, but instructions have to be simple and linear. These players don’t often understand boundaries, and will usually chase the ball and keep playing well after it has left the field. Players have ‘their’ ball and will get mad when someone else uses it.

At this age, players can start to understand that they have a teammate. The notion of intentionally passing to someone is just starting to take hold. However, there can be a big gap between players on a team where some are still in the ‘me’ phase, while others have progressed to the next. Players begin to understand space better, and the idea of working in very small groups starts to take hold.

Around these ages is when team identity starts to emerge. Players will proudly announce which team they are on. They begin to understand how working as a group can have advantages. They begin to understand space and how being in it will give them time to dribble/pass/shoot when they get the ball. Their physical ability and strength allows them pass and shoot from greater distances. (Source: The Official US Youth Soccer Coaching Manual)

Understanding these different milestones will greatly help you focus your training topics and will help alleviate your stress levels as a coach. For example, trying to teach your team of six year old players how to spread out and pass to each other is an exercise in futility! They aren’t ready for it, and you shouldn’t try and force them to be.

Here are some do’s and dont's for each age group, and how you should focus your training topics with your team:

Coach, remember that the age of your team heavily impacts what they are able to learn. Do not try to teach them things they aren’t ready to physically or mentally understand. It’s okay if your team can’t pass the ball or spread out at six, seven, or even eight years old, because everyone develops at their own rates. In recreational soccer especially, there can be such a wide range of ability and maturity on a team that you often have to teach to the middle of your group, and that is okay. Above all, if you can make your practices fun, active, and stimulating, your players will learn it eventually because, if they are having fun, they will stay in the game longer. If you try to teach above their ability, and they get frustrated and stand around a lot, then they may quit the sport and never get a chance to learn it at an older age.

If your players ARE at the right age and stage to begin learning more difficult concepts, you can find lots of activities on how to teach passing and spreading out here: Soccer Passing Drills & Games.

Finally, it is highly recommended to read the Official US Youth Soccer Coaching Manual by Dr. Thomas Fleck, Dr. Ronald W. Quinn, Dr. David Carr, William Buren, and Virgil Stringfield. It was published in 2008, but is still extremely relevant and has fantastic information in it. It’s a quick read and is also chalked full of games and activities (that are developmentally appropriate!) to play with your team.