Lesson 12: How Do You Decide Playing Time? 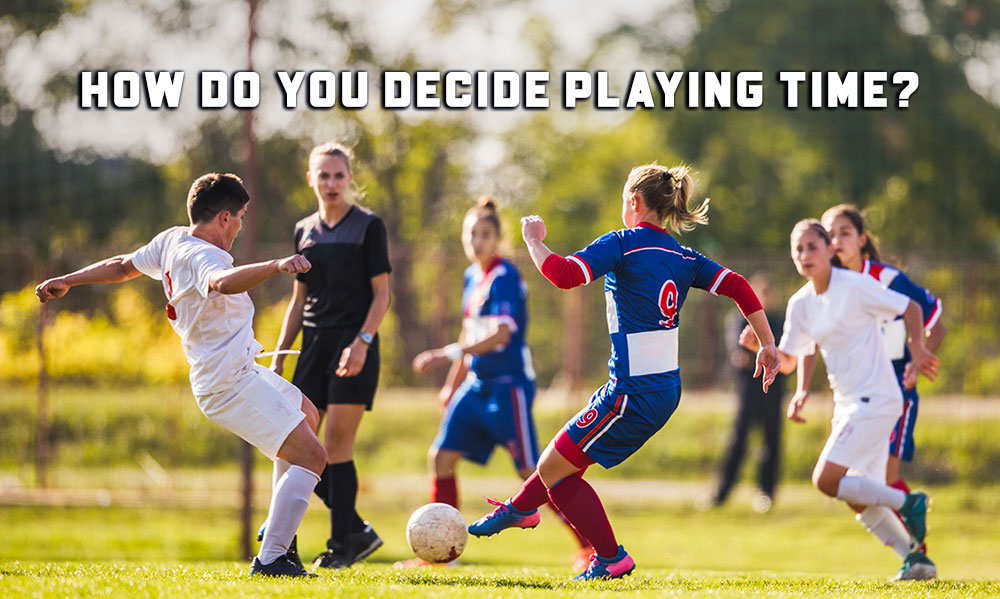 Ok, here we go: how to decide playing time.

This question is so difficult to answer and one that has plagued ancient philosophers and highly seasoned modern coaches alike. The answer, unfortunately, is ‘it depends.’ However, we can make a first big step towards clearing up this question by answering “does your team play in a recreational or competitive / travel league?”

Most recreational leagues have a policy of ‘equal’ or ‘at least 50%’ playing time during a game for every person on the team. If this is the policy of your league, then please follow regardless of your own personal beliefs on playing time. This policy does raise some very common questions, though. Some examples are:

"What if I have a player who rarely attends practice? Is it fair to give them the same playing time as someone else who attends all the practices?"

The vast majority of players are below driving age, which means that your players are not in control of their schedules or transportation. By punishing your players for not attending practice, it is holding them accountable for something they have no control over. Instead, try talking to the parents of the player in question, and develop strategies to get their player to practices. If a player cannot make any practices due to other obligations, give that player "homework" so they have an opportunity to improve at home. Examples of homework for a younger player are: "play soccer in your backyard with your siblings/parents for 30 minutes" or "pass the ball against the side of your house 50 times." An older player's homework could be "go on a 1-mile jog while dribbling a soccer ball the entire time," or "Improve your juggling score by 100%." Be creative! "

One of my players doesn't work hard in practices. What message am I sending if I let them play as much as the player who is always hustling?"

Coaches need to be able to set expectations for their players, and then hold them accountable for their actions. While all players usually need to play equally or 50% in recreational soccer, feel free to use other incentives to motivate the players on your team: the top hustlers in practice get to start the game, or the person who improved the most in a skill gets to be the captain for the weekend. Furthermore, if you have a player that rarely extends effort, when they do show more drive, it is vital that you recognize that change and reward it appropriately. Kids (and people in general) respond better to rewards than consequences. If a player doesn't show any drive, no matter what you do, then reaching out to your league officials for more specialized help is a must.

In the end, if you are coaching in a recreational league, please read and understand the league rules and expectations. If you have questions, please reach out to that league’s admin or coaching director.

There are so many different levels of youth soccer in the United States, ranging from TOPSoccer and recreational, through state league and high school, and all the way up to Elite Clubs National League (ECNL) and the US Soccer Development Academy (DA). Every level of play has different focuses and provide different set of expectations and challenges for players and coaches alike. In recreational leagues, playing time is mostly even. However, in most competitive youth leagues, playing time is harder to earn and the top players frequently play the entire game. It’s important when deciding on playing time in these different levels of competitive (non-recreational) games by several important factors:

Playing time in competitive soccer is such a difficult subject, because there are so many factors at play. However, regardless of the situation, there is one golden rule:

Every player is to receive meaningful playing time.

That means, don’t ever leave a kid on the bench for an entire game. When you do play them, make sure they are getting minutes where they have enough time to make an impact on the game. That means don’t play them for the final five minutes of each half; give them a chance to make a difference. If a player does get less minutes then normal in a game, make sure to play them more the next one.

At the end of the day, regardless of leagues and results, our purpose as coaches is to develop young players and help foster their love for the game. You can do neither of those if certain players only ride the pine.

Finally, be super open and honest with communication.

Talk about your coaching philosophy and views on playing time during a pre-season parents / players meeting, and set those expectations right from the start. During the season if you do have a player who is getting less playing time, make sure to have conversations with them and let them know what they can do to improve their standing on the team. If you are not open to these types of conversations, then you’ve given that player no chance of success or future improvement. Make sure to be the type of coach who is open and honest with the players on their team, and cares equally for all their development, not just the ONES who are currently the best.