The teams begin play with a 2 v 2 inside of the penalty area. While attempting to score, the attacking team has the option of passing to a teammate on the outside to bring him into the play. When they use this option, the attacker who passed the ball out must switch out with the new attacker. Also, the defending team has the option of making a switch as well when the ball is passed back outside. Any of the outside defenders can be called upon to switch in.

1   Concentration – Pay attention when on the outside of the area. Stay involved in the play.

2   Decision Making – Don’t force an attack to goal. Turn away from goal and pass it back out.

3   Communication – On defense, the first shout sorts it out. Call out switches immediately.

Progression 1 –  Add a neutral inside of the penalty area or progress to 3 v 3. 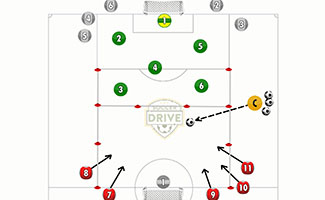