The teams play 5 v 3 in the end zones, looking to switch the ball over to the other side after making five consecutive passes. When the ball is switched, the defenders must follow it over and re-form the 5 v 3. When the attackers lose the ball, they become the defenders and play re-starts in the opposite end zone.

1.  Anticipation – If the ball is about to be turned over, start moving before your opponent does.​

2.  Concentration – Do not ‘switch off’ with a change in possession. Continue playing.

3.  Team Defending – The two defenders in the central zone must move as a unit.

Progression 2 – The attacking team must make ten passes before changing the ball. 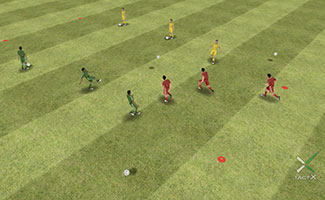