The two teams play 7 v 4 on the inside of the field with six additional players on the outside supporting the four defenders. The seven attackers on the inside try to score on the triangle goal in the center. When the defenders win the ball, they can combine with their six teammates to try and score in either of the goals on the end line.

1.  Speed of Play – Play one and two touch soccer and force the defenders to chase.

2.  Switching the Field – As the defenders flow towards the ball, change the direction of play.

3.  Width and Depth – Expand the field and force the defenders to move out from the goal.

Progression 1 – When the defenders win the ball, they must advance it from one end line to the other before shooting.

Progression 2 –  Play 5 v 5 with neutral players on the outside. 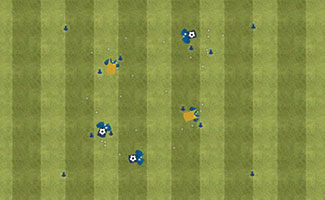